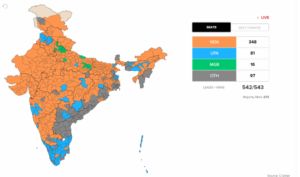 The BJP-led National Democratic Alliance (NDA) is on course to improve its results from 2014, moving from 336 seats to at least 349 in India’s 543-seat parliament. The long-dominant Indian National Congress (Congress) is set to marginally improve on its disastrous 44-seat showing in 2014, but perhaps only surpassing 50. The Congress-led United Progressive Alliance may not even reach triple digits. Congress president Rahul Gandhi, looking set to lose one of the two seats he contested, conceded defeat and congratulated PM Modi.

With this victory, the BJP has proven that it can extend its reach beyond the “Hindi Belt” of North India. The BJP even won in states that Congress had won in assembly elections just a few months ago (Madhya Pradesh, Rajasthan, and Chhattisgarh).

Surpassing all predictions, the election results show just how popular Modi remains, despite having faced criticism on a range of economic and social issues. Since taking office in 2014, joblessness has risen to a 45-year high, farm incomes have fallen, and demonetization and a tax overhaul were widely criticized. Yet Modi’s popularity appears to have been left undiminished, thanks to combination of nationalist rhetoric, strong but recently diminished growth, a range of welfare programs, and a particularly disorganized opposition party. Finally, Modi’s handling of the February 14 terrorist attack in Kashmir played to his strengths on national security, and his hard-line rhetoric on Pakistan enhanced his strongman image at a time of increased geopolitical uncertainty.

Moving forward, Modi is likely to use the momentum gained from the elections to enact a decisive reform package.This will be reflected in July’s Budget speech and will likely address a range of domestic development goals (doubling farmers’ income, improving infrastructure, and broadening access to healthcare). The government is also likely to recommit to foreign investment and job creation, including through Modi’s signature Make in India campaign.