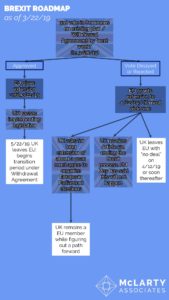 Much has happened since our last Brexit analysis on March 18, which is here.  But despite all the news coming out of this week’s European Council summit, we still have little clarity as to how or when Britain will leave the EU, or under what conditions. It is entirely possible that we will still face massive uncertainties when we reach the new Brexit deadline, Friday, April 12.

The European Council was remarkable for the way the EU27 leaders took control of the process. After directly questioning Prime Minister May about her plans – and concluding that she would be unable to manage the situation – they cast aside the draft conclusions and instead negotiated two deadlines that were then presented to the British.

1) If the Withdrawal Agreement is passed by Parliament this week (it has already suffered two major defeats), an extension will be granted until May 22, to allow the British to pass implementing legislation before moving to the transition period. IF this scenario becomes real, tariff and customs arrangements will stay as is during a lengthy transition period (perhaps two years) while new customs and trade arrangements are negotiated.

2) But if the Withdrawal Agreement is again defeated (or never put to Parliament), Britain will be granted an extension only until April 12.  By that date, the UK must either:

At this point, there seems to be little chance that the Commons will pass the government’s deal, including the Withdrawal Agreement, before April 12.  This means that the most likely choice will be the bilateral one between a long extension and “no deal.” Because the Commons has already passed a motion allowing an extension and acknowledging that a long extension will require UK participation in the European Parliament elections, the Government can argue that it could request such an extension – and promise to organize elections – without a further vote. But “no deal” remains a very real possibility, for which everyone should be prepared.