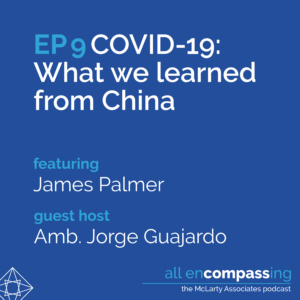 Guest host Jorge Guajardo sits down with James Palmer, senior editor at Foreign Policy and longtime Beijing correspondent, to discuss the spread and response to COVID-19 in China and around the world.

James Palmer is a senior editor at Foreign Policy. Palmer is the author of The Bloody White Baron: The Extraordinary Story of the Russian Nobleman Who Became the Last Khan of Mongolia and The Death of Mao: The Tangshan Earthquake and the Birth of the New China. He won the Shiva Naipaul prize for travel writing in 2003.

Ambassador Jorge Guajardo, Senior Director, has had an active career in government and significant experience in the private sector. He most recently served for six years in Beijing as the Mexican Ambassador to the People’s Republic of China.