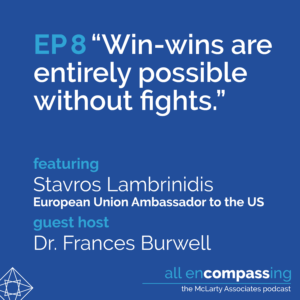 Guest host Fran Burwell sits down with Ambassador Stavros Lambrinidis, the European Union Ambassador to the United States. We discuss the current challenges and future opportunities for the transatlantic relationship, from the trade war and climate change to regional security and Brexit. Plus, we hear about the ambitious geopolitical agenda of the new European Commission.

Dr. Frances Burwell, Senior Advisor, served as the Atlantic Council’s Vice President for European Union and Special Initiatives, and as Director of Transatlantic Programs and Studies, from 2008-2016. Dr. Burwell was also a leading initiator and organizer of the Wroclaw Global Forum in Poland, the Council’s flagship European conference. She is currently a Distinguished Fellow with the Atlantic Council’s Future Europe Initiative. Dr. Burwell’s research has focused on Brexit, transatlantic security, digital economy, and EU institutions and processes.