Podcast Episode 6, feat. Sec. Ernest Moniz: “Time is not on our side.” 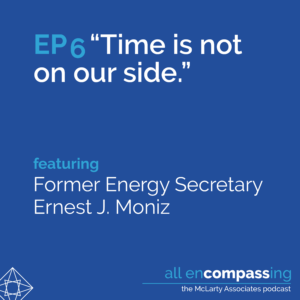 Host Safiya Ghori-Ahmad sits down with former US Secretary of Energy Ernest Moniz to discuss his current research agenda, the role of innovation in tackling climate change, his plans for a “Green Real Deal,” the fate of the JCPOA, and what first got him interested in physics way back when.

Secretary Ernest Moniz served as the thirteenth United States Secretary of Energy from 2013 to January 2017. As Secretary, he advanced energy technology innovation, nuclear security and strategic stability, cutting-edge capabilities for the American scientific research community, and environmental stewardship. He strengthened the Department of Energy (DOE) strategic partnership with its seventeen national laboratories and with the Department of Defense and the broader national security establishment.
Secretary Moniz currently serves as President and CEO of Energy Futures Initiatives and is the Co-Chair and Chief Executive Officer of the Nuclear Threat Initiative (NTI). Secretary Moniz served on the Massachusetts Institute of Technology faculty from 1973 until becoming Secretary of Energy in 2013 and is now the Cecil and Ida Green Professor of Physics and Engineering Systems emeritus and Special Advisor to the MIT President.
Dr. Moniz received a Bachelor of Science degree summa cum laude in physics from Boston College, a doctorate in theoretical physics from Stanford University, and nine honorary doctorates, including three from European universities.