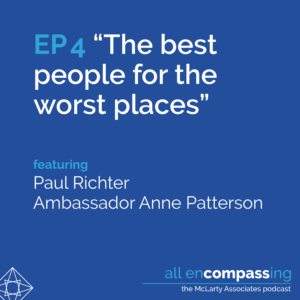 Host Safiya Ghori-Ahmad sits down with author Paul Richter to discuss his new book, The Ambassadors, which profiles four “expeditionary” Ambassadors – Ryan Crocker, Robert Ford, Chris Stevens, and Anne Patterson – while they serve in some of the most difficult posts in the greater-Middle East. Later, they’re joined by Ambassador Anne Patterson herself to delve deeper into her experiences outlined in the book and the current state of our diplomatic corps.

Paul Richter covered the State Department and foreign policy for the Los Angeles Times out of its Washington, DC, bureau. He previously covered the Pentagon, the White House and, from New York City, the financial industry. He was raised in Minneapolis and Washington, DC, and graduated from Clark University. He left The Times in 2015.

Ambassador Anne Patterson was the Assistant Secretary for Near Eastern and North African Affairs at the Department of State (2013-2017) before being appointed to the Dow Jones Special Committee in April 2018. She served as Ambassador to Egypt (2011-2013), to Pakistan (2007-2010), to Colombia (2000-2003) and to El Salvador (1997-2000). She recently retired with the rank of Career Ambassador after more than four decades in the Foreign Service. Ambassador Patterson also served as Assistant Secretary of State for International Narcotics and Law Enforcement Affairs and Deputy Permanent Representative to the United Nations, among other assignments. She has also served as a senior fellow at the Jackson Institute for Global Affairs at Yale and is a member of the Commission on National Defense Strategy.