Setting the scene for diplomacy; what does the grand stage look like and how do we take advantage of it? Ambassador Capricia Penavic Marshall, Secretary Hillary Clinton’s Chief of Protocol, reveals all in her new book “Protocol: The Power of Diplomacy.” A second-generation American, Ambassador Marshall shares how her multicultural background prepared her for her tenure in both the Clinton and Obama Administrations facilitating the highest levels of dialogue. 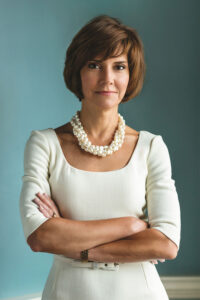 Capricia Penavic Marshall serves as Ambassador-in-Residence at the Adrienne Arsht Latin America Center at the Atlantic Council in Washington, DC. She is President of Global Engagement Strategies, which advises international public and private clients on issues relating to the nexus of business and cultural diplomacy. She travels across the country speaking to organizations and corporations about her experiences, lessons she has learned throughout her career in public service, and how best to integrate cultural diplomacy into business.

From 2009 to 2013, she was Chief of Protocol of the United States, bearing the rank of Ambassador and setting the stage for diplomacy at the highest levels. In this capacity, she worked to leverage U.S. relationships with foreign governments developing strategies to transform global engagement. Ms. Marshall oversaw six State and Official Visits, countless Working Visits, the G20, Nuclear Security, APEC, G8, NATO and Sunnylands Summits, and the protocol arrangements during travel with the President and Secretaries of State to forty-two countries. Moving beyond traditional methods of engagement, Ms. Marshall fostered international goodwill through a new division in the protocol office, Diplomatic Partnerships. With creative programming under this division she created sustained, mutually beneficial partnerships between the foreign Diplomatic Corps and business, government and community leaders across America.

From 1997 to 2001, Ms. Marshall served as Deputy Assistant to the President and White House Social Secretary. From 1993 to 1997, she was Special Assistant to the First Lady of the United States, Hillary Rodham Clinton. In addition to her Bachelor’s Degree in Political Science from Purdue University, Ms. Marshall holds a Juris Doctor from Case Western Reserve University School of Law.

Ms. Marshall is a first-generation American of Croatian and Mexican descent. She has been named to ELLE magazine’s annual “Washington Power List”, as one of DC’s most influential women.

Podcast Episode 14, feat. Ikea’s Pär Stenmark: “Socially beneficial, economically viable, and environmentally appropriate”Podcast
Podcast Episode 16, feat. Adtalem’s Lisa Wardell: “Before we get to inclusion, we got to get some diversity.”Podcast