Podcast Episode 10, feat. Fred Hochberg: “Where did they think the banana came from?” 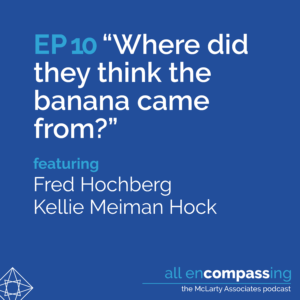 Guest host and McLarty Associates managing partner Kellie Meiman sits down with Fred Hochberg, former President of the Export-Import Bank of the United States (2009-2017). We discuss Hochberg’s new book, Trade is Not a Four-Letter Word: How Six Everyday Products Make the Case for Trade, as well as the importance of increasing public awareness and understanding of trade policy.

Fred Hochberg served as the chairman and president of the Export-Import Bank of the United States under President Obama from 2009 to 2017, becoming the longest-serving chairman in the agency’s history. Hochberg also served for five years as dean at the New School in New York City and has been a fellow at the Institutes of Politics at both the Harvard Kennedy School and the University of Chicago. Previously he served as acting administrator of the Small Business Administration under President Clinton. Before entering public service, Hochberg spent almost two decades leading his family’s direct-marketing business, Lillian Vernon, where he oversaw a forty-fold increase in revenue.

Kellie Meiman Hock, Managing Partner, is responsible for external matters for the firm. In addition, she has led the Brazil & Southern Cone and trade practices of McLarty Associates since 2000.