John D. Negroponte – Recipient of the 2019 Walter and Leonore Annenberg Award for Excellence in Diplomacy

McLarty Associates congratulates our vice chairman, John Negroponte. The American Academy of Diplomacy has honored him as the 2019 Walter and Leonore Annenberg Award for Excellence in Diplomacy. 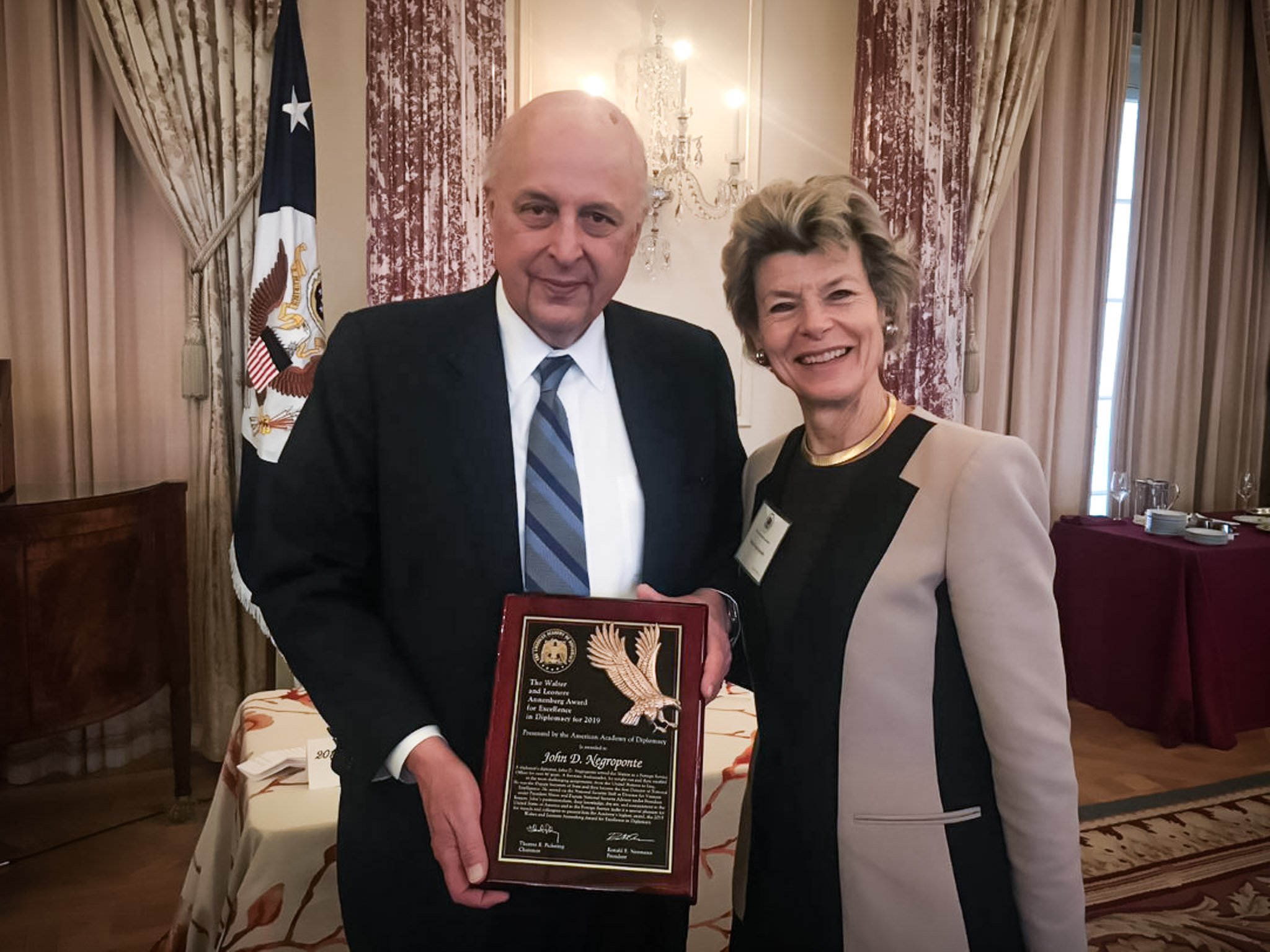 Thank you to the Academy for this award in recognition of my service.

Diana and I happen to have known Walter and Leonore Annenberg, both when Walter was Ambassador to the UK and later when Mrs. Annenberg was Chief of Protocol in the Department. Among many fine attributes, the Annenbergs were committed to the proper conduct of American Diplomacy.

I also want to acknowledge the prior recipients of this award since 1988. I am pleased to say that I am or was personally acquainted with each and everyone of them, except George F. Kennan. Many have been good personal friends. Ten of them have passed away, including two particularly close colleagues, Robert Oakley and Richard Holbrooke, icons of “expeditionary diplomacy” before the Department had even adopted use of the term. Bob was a mentor when I was a political officer in Saigon and Richard, well, what isn’t there to say about Dick Holbrooke. We were house mates in Saigon. Dick recruited me to be part of the U.S. Delegation to the Paris Peace Talks on Vietnam in 1968-69 and in the latter part of the Carter Administration he recruited me to be his Deputy for S.E. Asia. Dick was passionate about many things, one of them was refugees. He successfully jaw-boned various Southeast Asian countries to grant first asylum to literally tens of thousands of Vietnamese boat people and I worked hard in support of his and the Department’s efforts to gain admission for 144,000 Indochinese refugees a year to the United States over a several year period. I recall the satisfaction it gave me when I got Lee Hamilton, Chair of the House Foreign Affairs Committee, to agree to support that number.

Bob Oakley and Dick Holbrooke believed strongly in telling truth to power. They did it well and forcefully. Their careers at times may even have suffered temporary setbacks, but that did not deter them. It is gratifying to see that this important tradition in our profession continues to this very day.

The late Kofi Annan was also a good friend as our delegation pursued U.S. goals at the United Nations. Being Permanent Representative of the United States to the United Nations is, if nothing else, an intensive course on the security problems of Africa. Sierra Leone, the DRC, Liberia, Ethiopia/Eritrea, The Western Sahara, Sudan, and the list goes on. I think one of the unsung accomplishments of our foreign policy has been our support for UN peacekeeping missions, foremost in Africa, and I was pleased to be associated with those efforts.

Other ventures at the UN were more controversial. I have in mind our debates on Iraq. We did succeed in the fall of 2002 in negotiating Resolution 1441, which established an excellent inspection regime for WMD in Iraq. But early the next year we failed to obtain a second resolution supporting the use of force against Iraq for being in material breach of its obligations.

We went in anyway, supported by a coalition of the willing, in what our leaders thought would be a short-lived effort. Interestingly, even though many Security Council members had objected to our invasion of Iraq, they subsequently participated in resolutions concerning the governance and maintenance of a multi-national force there, both because of the intrinsic importance of the subject and the opportunity those resolutions afforded to affect and control our behavior. I recall negotiating Resolution 1546 about the occupation and political future of Iraq, which passed on June 8, 2004, just three weeks before my own deployment as Ambassador. At the time, it felt very much as if I were writing my own instructions for my next assignment. Nonetheless, the fundamental lesson from our UN experience with Iraq was our failure to get the legitimating imprimatur of a UN Security Council Resolution before using force against that country in 2003.

As is no doubt true for many in this room, a large part of my earlier career occurred during the Cold War. The focus of my assignments was on regional conflicts, especially Vietnam, which turned out to be a defining experience in my diplomatic career. Much of what I learned about the less developed world, about reporting, about development, about civil-military relations and so-called “nation building,” I learned in more than three-and-one-half years in Vietnam and subsequent tours in Paris and Washington. If you include my time as Dick Holbrooke’s deputy for S.E. Asia, I ended up spending 13 years working on the Vietnam question. It is just too long a story to tell here today. But I will say this: After Saigon collapsed in 1975, it was stunning to me that hostilities should break out between Vietnam and China in 1979. And it was interesting to see how the impetus for normalization of relations between us and Vietnam came initially from the Vietnamese side. Today, we have good relations with Vietnam and both sides see the relationship as important in the context of a rising China, this notwithstanding the fact that Vietnam is still run by the very same communist party that was established by Ho Chi Minh in 1930. Which brings me to our contemporary diplomatic challenges. I see three, each of which will require all the diplomatic talent we can muster.

First is the relationship with China. As someone who accompanied Henry Kissinger to China in 1972, I have for most of these past 47 years seen U.S.-China relations as a positive sum game, a win-win situation. As it turned out, when I was Deputy Secretary a little more than 10 years ago, Condi Rice asked me to handle the U.S.-China political dialogue with my Chinese counterpart Dai Bing Guo. At that time, we still looked at U.S.-China relations as a positive sum situation, although troubles were brewing both in the South China Sea and on the technology front.

Today, that situation has changed quite dramatically, and the general view of U.S.-China relations has soured. China is perceived as a serious competitor, at best, and a dangerous strategic rival at worst. This is a relationship that needs to be carefully debated both amongst us and with China itself. What kind of geopolitical future do we see for this world? Do we really want to decouple our economies, as some are suggesting? And do we contemplate some kind of technological cold war? Of course, one big difference between China today and the Soviet Union when it existed is that our two economies are much more integrated than ours ever was with the Soviets. And even today our trade with China is at least an order of magnitude more voluminous that it is with Russia.

I don’t have an easy fix to suggest except to say that I think it in our interest to limit damage to our relationship with the Chinese, to identify points of divergence and to work with them assiduously to either find solutions or isolate differences so that they don’t contaminate other positive elements of our relations. We must work to preserve, if possible, our ability to work together to address global and regional problems. All this will take lots of diplomacy and all the training and capabilities that underpin it. But a U.S.-China relationship at loggerheads will make global and regional issues just that much harder to address.

The second issue is the environment. I was privileged to serve in the Bureau of Oceans and International Environmental and Scientific Affairs (OES) for a total of five years, first as Deputy Assistant Secretary for Oceans and Fisheries and later as the Assistant Secretary. These assignments were eye-openers and involved wall-to-wall negotiating, whether about protecting Alaskan salmon runs from predatory Japanese fishing fleets or negotiating a convention on Antarctic Marine Living Resources. During my time as Assistant Secretary I counted 13 different agreements or treaties our office negotiated, including the Montreal Protocol of 1987 on Substances that Deplete the Ozone Layer. Our chief negotiator was Richard Benedick, my deputy for environmental affairs, who was a driving force not only in negotiating the text of the convention but also in persuading the EU, Russia and Japan to come along, with the help of scientists from NOAA and NASA. Dick wrote a very good book about this experience entitled “Ozone Diplomacy.” My job was to steer the interagency process which was complicated by various non-believers in OSTP and the Interior Department. The then Interior Secretary Don Hodel didn’t believe the science and, when asked what we should do about the destruction of the ozone layer by chlorofluorocarbons, famously responded that people should wear more sun block. Herblock did a wonderful cartoon about this. Thanks to the tremendous support of Secretary Shultz and Deputy Secretary Whitehead, we succeeded in overcoming these interagency hurdles.

The thing about the Montreal Protocol is that is was the first treaty universally adopted to protect our atmosphere. It gives pause to think that 32 years later there have not been any further such binding agreements to deal with global warming. Meanwhile, ocean temperatures continue to rise, the Arctic and Antarctic ice cover continues to melt away and our environmental diplomacy is stalled. We definitely need to up our game. A good place to start would be to fill the position of Assistant Secretary for OES which has been vacant for this entire administration.

The last issue is trade. As Ambassador to Mexico in the Bush 41 administration, I worked on the conception and supported the negotiation of the NAFTA. Entering into force in 1994, the agreement has resulted in closer ties between the US, Mexico and Canada and the quadrupling of levels of merchandise trade. A revised version of the NAFTA has been negotiated – the USMCA – and awaits approval by the Congress. It is very important to North American competitiveness that this agreement be passed. There is some hope that this may happen before the end of the year. It is also critical to the US-Mexico bilateral relationship.

More broadly, trade policy has in many instances become a surrogate for strategy towards various parts of the world. It is frequently the most positive aspect of our relationship with a particular country or region. George Bush Senior wanted a free trade agreement for the Americas after the NAFTA; but that concept faltered over Brazilian objections. More importantly, the Obama administration devoted considerable time and effort to the successful negotiation of the Transpacific Partnership (TPP) only to have the current administration withdraw our signature in its initial days. This effectively left us without an economic strategy towards the Asia-Pacific region and unnecessarily created opportunities for China. I would hope that at some point in the future the administration would reconsider its position on the TPP.

Whether it is relations with China, environmental protection or global trade, we cannot just look back with satisfaction on any modest accomplishments we may have achieved in the past. In this more complex and fast-moving world, they pale in comparison to what lies ahead. Our diplomacy and our diplomatic officers can be at the forefront in dealing with these new challenges. We should trust them with that responsibility. If we do, I am confident they will continue to make the valuable contributions to our country’s well-being that they have made since the founding of the Republic.

Thank you again for this important award.