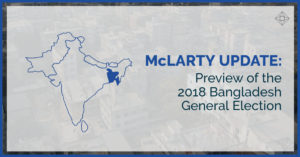 On November 12, the Bangladesh Election Commission announced that the next elections will take place on December 30, 2018. Prime Minister Sheikh Hasina is vying for her third consecutive term.

Since the last election, a number of senior BNP leaders have effectively been forced into retirement, while at least six leaders of the Jamaat-e-Islami party were executed by the current government for crimes committed during the Bangladeshi war of liberation in 1971. The leader of the BNP, Khaleda Zia, has been imprisoned on corruption charges since February 2018. Her son, Tarique Rahman, was sentenced in absentia on corruption charges; he remains in exile in London.  This has left the BNP in a relatively weakened state – and has forced them to seek other allies to contest the election. Those opposed to the Awami League have formed a couple of alliances of parties. The most prominent is the Jatiya Oikya Front, led by former law and foreign minister Dr. Kamal Hossain.

Prime Minister Sheikh Hasina: Prime Minister Hasina is determined to win her third consecutive election and has been focusing on the election for over a year now. During her time in office, Bangladesh has steadily improved in development metrics – and has achieved the economic and social conditions needed to be recognized as a developing country, rather than a least developed country. This is a matter of pride for Prime Minister Hasina, and rightfully so. Bangladesh’s economy has been growing above 6% for the past 8 years, and last year, registered a 7.3% growth. Bangladesh has also made significant strides towards educating girls and women’s empowerment, efforts which have led to improvements in children’s health, and now, Bangladeshis’ average life expectancy is 72 years, as compared to 68 for Indians and 66 for Pakistanis. She is a canny politician, devoted to the memory of her father, who founded Bangladesh, and has worked hard to increase her power base and marginalize her opponents.

Khaleda Zia: Former Prime Minister Khaleda Zia is the head of the BNP. However, she is currently jailed on corruption charges and the Supreme Court has disqualified her from contesting the elections (the ruling was that a person jailed for more than two years cannot contest polls). In these circumstances, two of her senior party figures have received the party’s nomination for the seats Begum Zia would normally have contested.

Dr. Kamal Hossain, an early member of the Awami League and a close adviser to Sheikh Hasina’s father, the founder of Bangladesh, is the most prominent of the non-BNP opposition figures. He served as Bangladesh’s first law minister in 1972. He also served as foreign minister and energy minister and helped to facilitate Sheikh Hasina’s return to Bangladesh from exile. However, a falling out with Sheikh Hasina in 1992 led to him leaving the Awami League. Dr. Hossain is now the president of the Gonoforum, which has allied with the Jatiya Samajtantrik Dal, and the Nagorik Oikya to form the Jatiya Oikya Front. The Front is loosely associated with the BNP.

Among the other parties, the Bikalpa Dhara Bangladesh, originally headed by senior former BNP leader Dr. Badruddoza Chowdhury, is badly divided. And the parties who constituted the nominal opposition for the past few years will continue to be effectively allied with the Prime Minister – barring a major change in her political fortunes.

What to look for:

Youth Vote: Approximately 23.5mn voters are between the ages of 18 and 28 (of a 103mn strong electorate). How they vote will be crucial to Prime Minister Hasina’s efforts to remain in power. In recent months, student protests over traffic safety have led to a severe police crackdown, but have also made the activism of young people a potential factor in the election.

Opposition Candidate for Prime Minister: Right now, there is no declared candidate for the opposition. Khaleda Zia is disqualified from participating in the election, and Kamal Hossain has said he will not be running himself on account of his age (80). The opposition parties will probably be headed by one of the figures running in one of Khaleda Zia’s constituencies. This effectively leaves the opposition without a candidate who has the heft to take on Prime Minister Hasina.

Seat Sharing: The big question is how many seats the Awami League will allocate to its 14 allies. Thus far, there have been no decisions made – November 28 was the deadline to file nominations, while December 7 is the deadline for withdrawal.

Violence: Whether or not this is a peaceful election remains to be seen. After boycotting the 2014 election, the BNP embarked on a series of protests to demand fresh parliamentary elections, which resulted in at least 31 fatalities and thousands of arrests. BNP activists have already begun clashing with police and the police have already detained at least 60 BNP supporters (according to media reports). As the election date nears, there is a threat of violence escalating.

Prime Minister Hasina is in a strong position to return for a third consecutive term. Bangladesh’s economy is growing and Prime Minister Hasina has made diversifying the economy away from textiles a major focus, in order to create more job opportunities. However, discontent has accumulated over the government’s high-handed style and a widespread perception that local and municipal elections in the past few years were manipulated in favor of the Awami League. In addition, she faces a united opposition for the first time, which may create an obstacle to returning to power. Despite this, it is fair to say that Prime Minister Hasina is a favorite to return to power.

McLARTY US MIDTERMS UPDATE: How a divided Congress could affect tradePublications
McLARTY G20 UPDATE: Debrief on the G20 meetings in ArgentinaPublications